With support from the Australian Government through the Australia-Cambodia Cooperation for Equitable Sustainable Services (ACCESS) Program, the Ministry of Women’s Affairs (MoWA) chaired a series of workshops on the Annual Operational Plan (AoP) and Budget Plan Development to implement the National Action Plan to Prevent Violence Against Women 2019-2023 (NAPVAW 2019-2023) at the sub-national level. 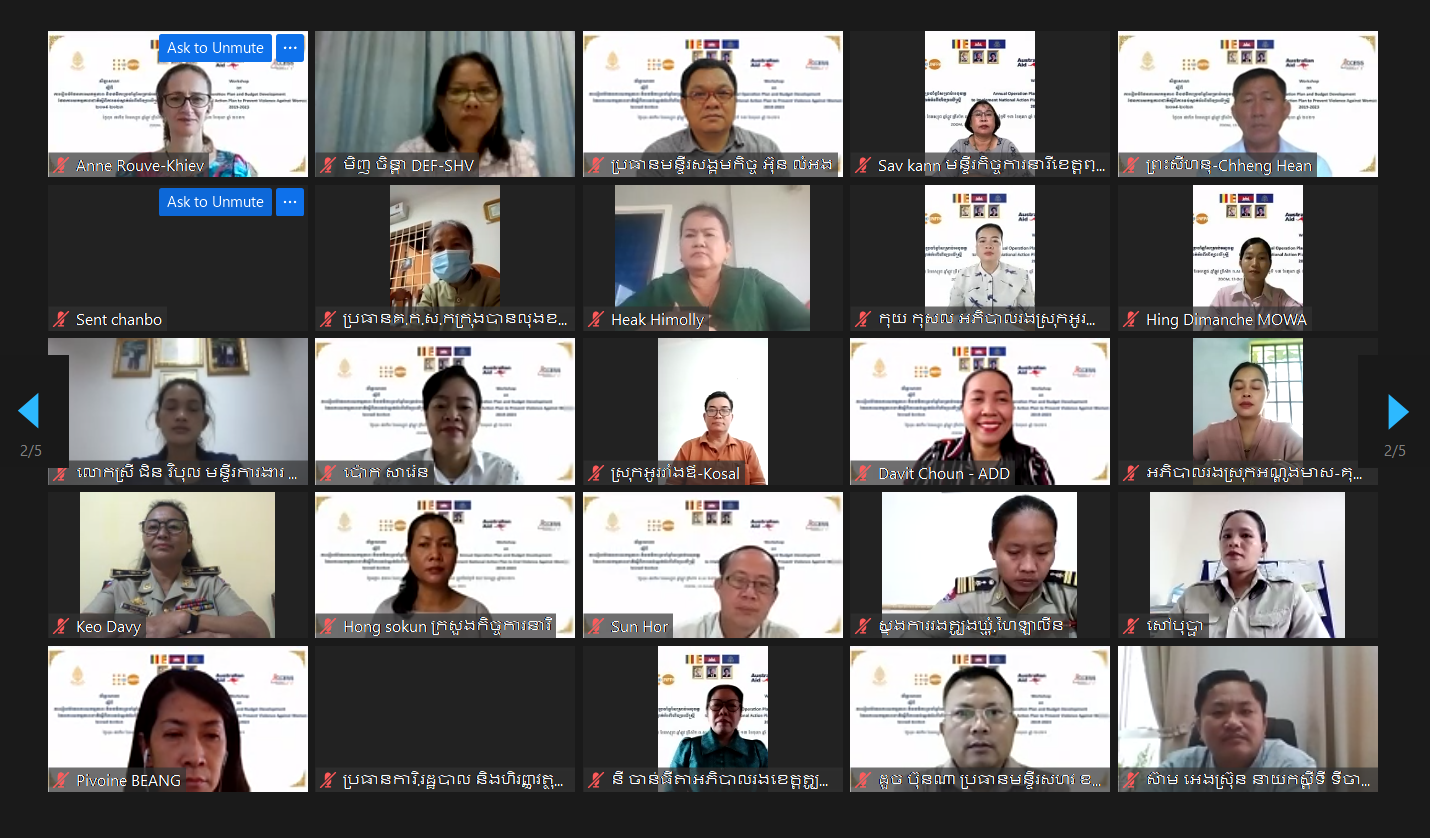 The workshops aimed to raise awareness about the NAPVAW 2019-2023 to stakeholders at both the provincial and district level, and to identify priority activities and plan the budget required to implement NAPVAW 2019-2023 as well as draft AoP templates for each targeted province. 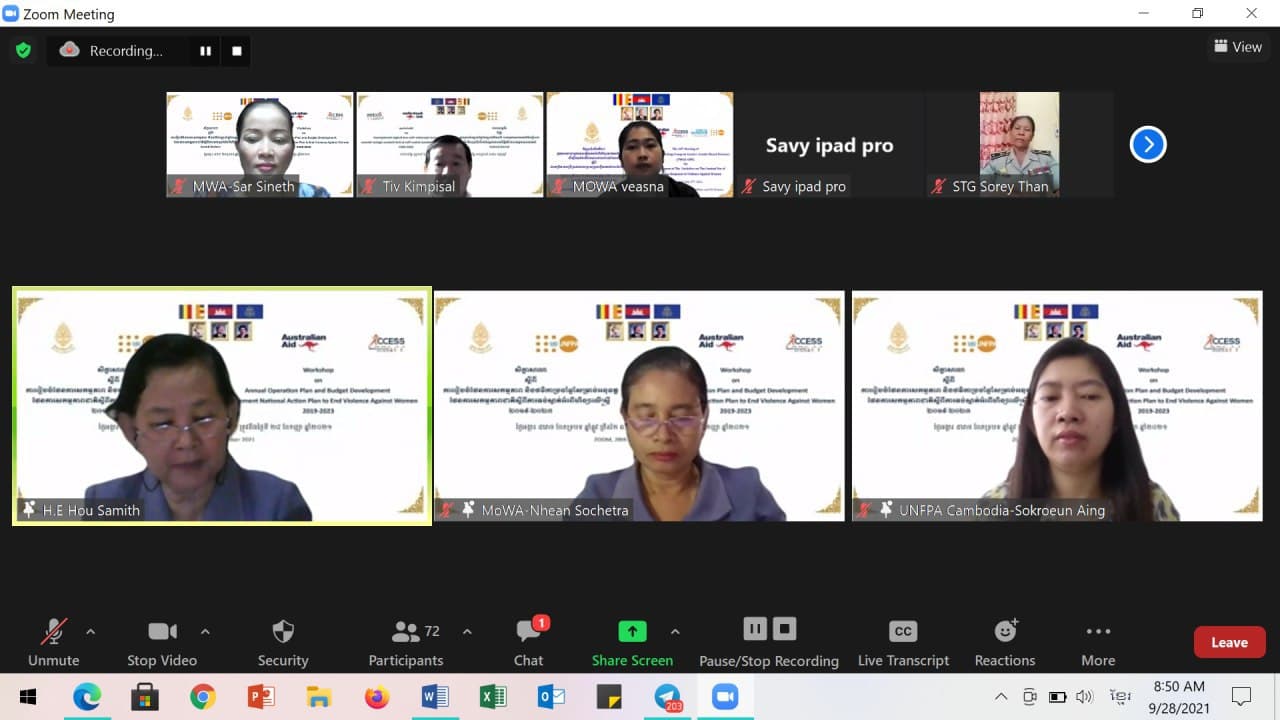 These workshops were presided by H.E Hou Samith, Secretary of State and H.E Tes Chan Saroeun, Under Secretary of State of the Ministry of Women’s Affairs (MoWA). Their Excellencies stated in the opening session that reducing and eliminating violence against women and domestic violence in Cambodia and promoting the provision of multidisciplinary services remains the Royal Government’s priority agenda for human resource development and sustainable national development.

Dr Ros Chhay, Senior Program Manager at the Australian Embassy to Cambodia, expressed his appreciation to the MoWA’s team for their tireless leadership, perseverance and coordination during the final development stage of the NAPVAW 2019-2023.

He encouraged all sub-national representatives to share their plan and to ensure that proposed actions are well captured in the upcoming 2022 budget in order to contribute to the achievement of NAPVAW 2019-2023 objectives. 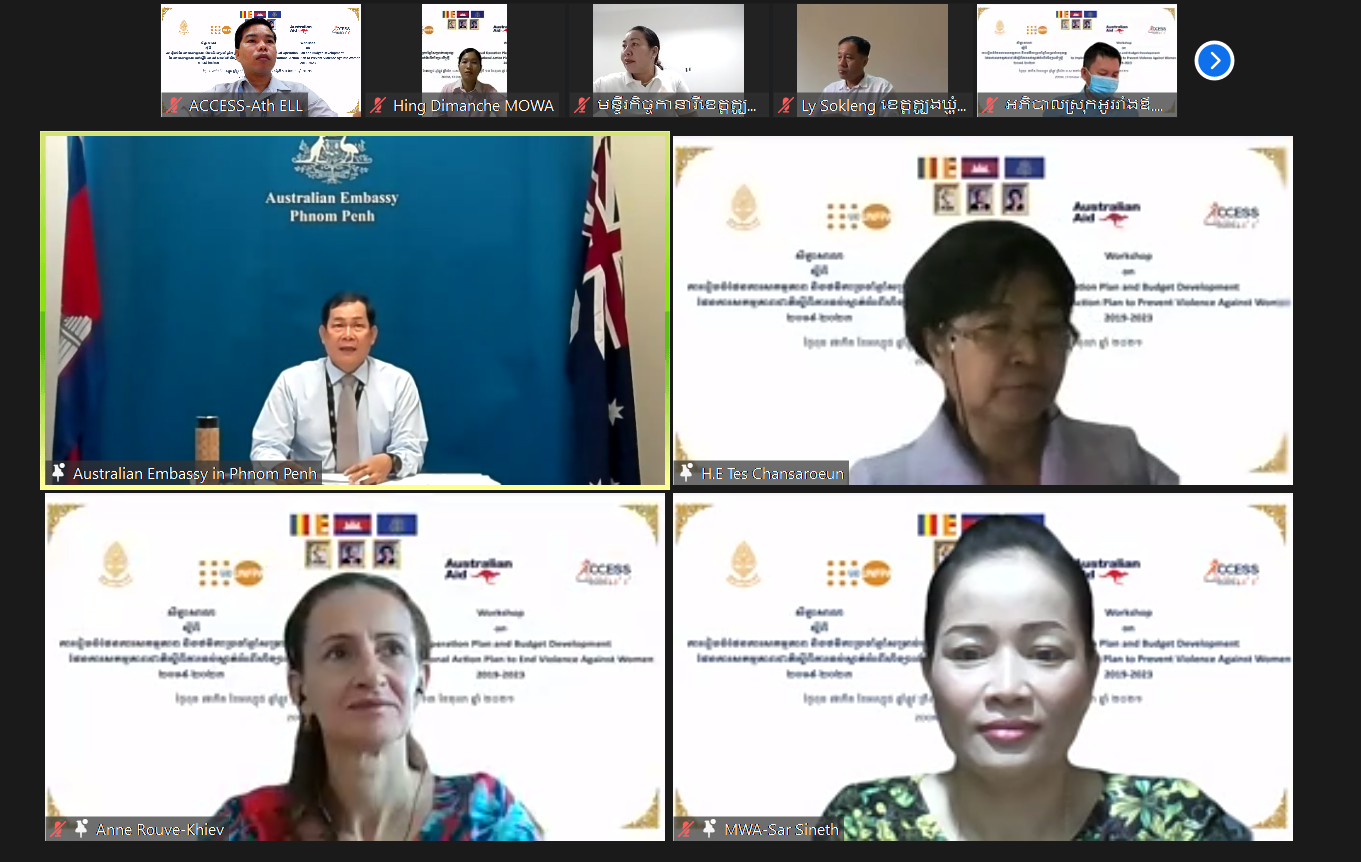 During the workshop, staff from the Social Development Department of MoWA presented the strategies in NAPVAW 2019-2023, some priority activities for NAPVAW, and the AoP template. They then held a discussion with sub-national partners on the timeframe of AoP submission and budget cycle, identify the supported to develop AoP and budget planning to contribute to NAPVAW 2019-2023. This workshop had given participants to rise their concerns when they are collecting AoP from other stakeholders for consolidating. Some participants suggested national level technical support to be available if any errors occurred in consolidating the AoP.

One female participant from Preah Vihear mentioned that the workshop brought together many key stakeholders and presented clear priority activities which gave her inspiration for how to design her AoP next year. The PDoWA Director in Preah Sihanouk province expressed a similar sentiment saying that the practicing filling of the AoP template was very useful for her. She is already familiar with the AoP template but the workshop helped her clearly understand how to align activities with the strategies in NAPVAW 2019-2023.

The Australian Government through the ACCESS Program is working in partnership with the Royal Government of Cambodia to support the implementation of the NAPVAW 2019-2023 and the National Disability Strategic Plan (NDSP) in ending violence against women and promoting disability inclusiveness.